There is something seriously delicious about the release of a new book, and that long awaited anticipation of getting your nose stuck between the pages.

Well – today you can. Welcome to the new world of T.G. Ayer. As part of the release, this amazing writer has provided us with a bit of an excerpt, and even the first chapter to whet your appetite.

So, without further ado – check out this beautiful book, and go buy yourself a copy if it sounds like it’s something up your reading alley. (I highly recommend it!) 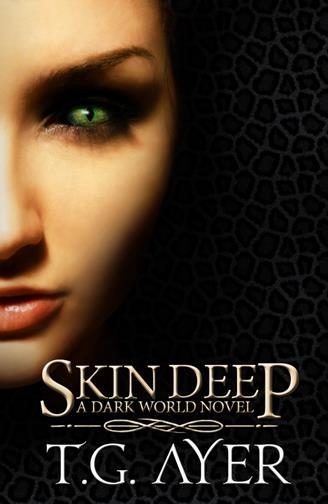 “The cold cocking of guns set my body on fire.

It also did something worse. With mortal fear gripping me, my imminent Change wasn’t taking second place anymore. My body churned the fear and my Panther grasped at the visceral power of the adrenalin in my veins.

A gunshot echoed around the garden, the sound ping-ponging off the aging brick walls of the surrounding apartment buildings.

I gasped as a blast of searing pain slammed into me.

As a bullet buried itself deep within my shoulder.”

Panther Shape-shifter Kailin Odel just wants to be normal. Leaving her clan, and her Alpha responsibilities, to live with her grandmother in Chicago had been the best thing for her. Only then did she discover her ability to track and kill the soul sucking undead creatures called Wraiths. Now she protected the humans, and had something to be proud of.

But, when she discovers the body of a murdered shape shifter, Kailin has to come to terms with the reality that her own kind are just as vulnerable as the humans.

The closer Kailin gets to the killer the more she has to face the intricacies of her people. When the time comes can she accept who and what her real purpose is?

Want to know more? Here is the first Chapter:

Icy pain sliced through my bones, the muscles of my arms, and the flesh of my back. My spine and thighs rippled, shifted. Changing.

I spared a rueful glance at my new leather pants. And ran faster.

Had to make it to the Rehab Center a few blocks away. I ran, my speed super-human, my need super-charged, covering ground fast enough to make it to safety before my Panther took over.

I took the corner of the street behind the Center at breakneck speed, and headed for the nearest of the gaping holes pockmarking the rusted fence.

The wind changed before I stepped off the curb. My ears peaked and I skidded to a halt, panting slightly, my backpack thumping against my side. The scream of tires on blacktop echoed on the night air, shattering the silence as it grew ever louder.

Followed in tandem by the whining wail of sirens. A battered sedan scorched down the street, suspended on the turn on only two wheels. The angry whip of charred rubber spiked the air. Horizontal again, the car jumped the curb and skidded sideways, avoiding a collision with the fence by mere inches.

I shrank into the shadows at my back, expelling a long, stale breath. My Panther, still confined within my body, bucked and jerked, craving release.

I let her surface.

For now, super-sight would be welcome. Unlike the ability to run like the wind while still in my Human skin, tapping into my Panther’s sight required a partial transformation—a risk I needed to take as my gut screamed danger.

Adrenalin surged, different again from the calm fervor of my wraith hunts. I blinked. Heat nipped at my corneas as I released my Panther sight—enough to give my eyes feline vision.

Sight, which sliced deep into the black nothing hugging the sidewalk, transformed my eyes into a solid Panther emerald. For the moment, plain old Kailin Odel was back to being Kailin of the Clan Panthera.

Someone shoved the rear door open, and I cringed as it creaked and complained. The occupants remained shrouded in the shadows of the vehicle’s interior. Something large, long and heavy hit the ground with a dull thunk. Then the sedan revved as unseen sirens drew closer, louder, and it spun around and skidded off the curb.

The battered car roared off, a police cruiser close on its tail with sirens screaming blue murder. It didn’t take a genius to figure out the parcel had to be awfully incriminating, for them to chuck it into the garden in such a flaming hurry.

My nostrils twitched at the stench of exhaust smoke, and my heart thumped as I waited to cross the street. I flicked a furtive glance at the dull red glow of taillights disappearing into the darkness. A breeze skimmed the sidewalk, ruffling my hair, and I hurried across the street as the sounds of sirens faded in the distance. I paused a few meters from the bundle, released my Panther’s nose and sniffed. Whatever I’d expected to scent on the air, it wasn’t the tang of copper drifting toward me—strong, rich and intoxicating.

Blood. Fresh blood. A luscious odor, laced with tendrils of the familiar.

I moved closer, my mind warring with my emotions. This was no bundle of rags, or some stolen junk those thugs had thrown away, but a living being. The blood surely meant the person now lying on the sidewalk needed medical attention.

I stood over the bundle, the cloying odor of the blood filling my nostrils, and hesitated in a moment of doubt and fear.

I took a deep breath and crouched beside the silent form. My hand quivered as I reached out and touched the scratchy, ragged fabric covering the shoulder of the silent figure. At first it resisted my tug, stiff against my touch, but one more gentle urging turned him toward me.

I gasped, my throat closing on the sound. My heel caught as I pulled away, and I staggered backward as hot horror burned through my veins. The face glistened, bloody and mangled. Raw muscles and ligaments lay exposed, bare. A low moan of horror echoed around me. Chills streaked up my spine when I realized the stricken sound had originated from my own throat. The familiar richness of him clouded my mind, clogging my throat and drugging my senses.

My throat spasmed, silencing a shriek as he stared at me. His breath whispered—shallow, irregular, the sound ragged as he labored in his final moments. He gripped with desperation to the disappearing threads which held him to this mortal earth.

His face held my gaze, and somewhere behind ribs of ice my heart clenched, threatening to implode. My own face stared back at me, reflected from within eyes as blue as oceans. Eyes filled with excruciating pain and desperate fear. He didn’t speak, just studied me for a few moments with those glorious eyes.

Life flickered and sputtered out of his beautiful eyes—eyes unable to close even after his soul departed his mortal body. Eyes stark and ghastly within a face flayed of every inch of its skin.

Mere seconds had passed, although I would have sworn it had been hours. Screeching tires again interrupted my horror, and the sedan skidded beside me before I could do much more than scramble away from the body. The killers had managed to lose the cops, and now they’d returned to retrieve the body.

They hadn’t bargained on having a witness.

The cold-cocking of guns set my body on fire.

It also did something worse. With mortal fear gripping me, my imminent Change refused to take second place anymore. My body churned the fear and my Panther grasped at the visceral power of the adrenalin in my veins.

A gunshot echoed around the garden, the sound ping-ponging off the aging brick walls of the surrounding apartment buildings.

I gasped as a blast of searing pain slammed into me, as a bullet buried itself deep within my shoulder.

I have been a writer from the time I was old enough to recognise that reading was a doorway into my imagination. Poetry was my first foray into the art of the written word. Books were my best friends, my escape, my haven. I am essentially a recluse but this part of my personality is impossible to practise given I have two teenage daughters, who are actually my friends, my tea-makers, my confidantes… I am blessed with a husband who has left me for golf. It’s a fair trade as I have left him for writing. We are both passionate supporters of each other’s loves – it works wonderfully…

My heart is currently broken in two. One half resides in South Africa where my old roots still remain, and my heart still longs for the endless beaches and the smell of moist soil after a summer downpour. My love for Ma Afrika will never fade. The other half of me has been transplanted to the Land of the Long White Cloud. The land of the Taniwha, beautiful Maraes, and volcanoes. The land of green, pure beauty that truly inspires. And because I am so torn between these two lands – I shall forever remain cross-eyed.