Gosh, I actually can’t believe how fast this year has passed by. It actually astonishes me. They say that having kids makes life pass you by at warp-speed, but I guess I just didn’t expect it. It’s like a slap in the face of reality. Not only am I getting older, but so is Abby. Today it is New Year’s Eve in my part of the world, and I am currently homebound sitting in the Ferry between the South and North Island of my beautiful country. Abby is asleep beside me – hopefully I get this post finished before she wakes her beautiful-self up.

This year has gone so fast, and so much has happened, that I’m going to have trouble reviewing it all.

2013 actually started off slowly… All I seemed to be focusing on was work and Abby – not on the stuff that made my life happy – well – except Abby of course. In March, one of my critique partners lit enough of a fire under my ass to get me motivated and back on track to refocus and start accomplishing a few things. I don’t know why I was in a funk at the start of the year… but my writing world was not a happy one. I couldn’t seem to figure out what to do. I didn’t have writer’s block – I think I had a life and goal block. It wasn’t healthy.

In April I made the decision that I would quite like to become a Hybrid Author – published both Traditionally and through Amazon – starting in 2014. I probably should have started doing this years ago, as I had the material – but I guess I just wasn’t mentally ready for it. I want the guidance of a traditional publisher, and the audience reach they have, as well as the ability to publish my own work and maintain that level of control.

I started working hard on my Urban Fantasy trilogy, wondering if that would be the first set of book releasing. I rewrote, added, and revised the shizzle of the first book. But it didn’t happen. I even stripped off the first half of the book and started rewriting. The biggest problem I had with it was not enough upfront and inspiring conflict with my characters at the start of the book. So what did I do? I parked it. It needed parking. One day I will get back to work on it and release it. Just not any time soon. I know it’s there, and I know it needs work, and what it needs. When I feel inspired and motivated to get back to work on it again, I will.

I started Dwell Design & Press (officially) this year. Gorgeous cover designs have been commissioned and

created, as well as rolling out all sorts of promotional material for book launches and whatnot. DD&P is starting to get a load of work too, and I’m definitely not complaining about it. It’s super awesome to do something I love – and people pay me for it. 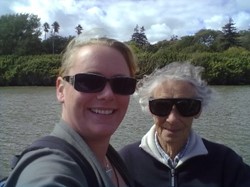 My gorgeous grandmother died. Yeah… that was a hell of a shock to the system. She was a woman who walked 5-10km per day every single day, and one day she woke up and couldn’t walk 10 steps without doubling over from being breathless. Since she lived closest to me, I was on duty with her for months. This meant multiple hospital and ambulance trips, batches and batches of soups and food for her to make sure she was eating properly, and keeping the rest of the family up to date… and fighting with medical staff. But it was finally time for Gran’s old heart to go, and I was pleased when it did. She had the whole family with her at her place, and it was really special in the end.

I survived two fairly significant earthquakes in our region. It was damn scary. When the first big earthquake hit, my husband and I were standing in the drinks aisle of the supermarket. We literally ran for our lives as bottles flew off the shelves in all directions. We even pushed a couple of older ladies out of the aisle as they had frozen in fright. The second earthquake happened less than two weeks later while I was at home. I had taken they day off Abby had been awake half the night, so I thought it best to keep my grumpy self at home. After taking out my anger and crabbiness out on cleaning the house, I finally sat down at 2.30 in the afternoon with a nice hot cup of tea to sit down and get a little writing done. At 2.31, the earthquake hit. I immediately braced myself in a strengthened area in our house, and rode it out. Stuff was crashing down around in the house, and the earth was groaning with pressure. The whole time, I had my eyes peeled on that fresh hot cup of tea that was sitting there full on my desk next to my laptop, praying that it didn’t upend its contents on my system. Miraculously – it didn’t. There was broken glass and crap all through my kitchen and bathrooms, including a TV and a DVD player that jumped off a shelf, but not one drop spilled from that tea cup.

My office building was quickly closed after those quakes, suffering some nasty damage. The last I saw of it was some photos of it in the paper with duct-tape around the stairwells.

I was made redundant after working at one place for nine years! It was actually great. I mean – crap at the time, but that was more because of the atmosphere of the place, not the work itself – or lack thereof. It was really really sad and awful saying goodbye to friends I had worked closely with over the years – but it also gave me the freedom to focus on a few other things. It gave me the opportunity to take a couple of months break before launching down a new career path. It also meant I got a shedload of wonderful writing done while spending time with Abigail at home. A total blessing. I needed the break, and I got one. It was wonderful.

I rewrote the opening of Tijuana Nights, and then continued writing it through NaNoWriMo, and December. Marvelous. I haven’t finished it yet though, but I would say I’m only a few days to a week away from accomplishing that goal. Venetian Nights is next on the writing agenda after Tijuana Nights. I will have to rewrite the opening for that book as well, but it’ll be fine. It shouldn’t take me too long, now that I know what I’m doing with the books.

Since October 1st, so far I’ve lost fourteen kilos of weight I have been carrying since pregnancy. It was almost like when I finished up with my job, all that stress that I had been carrying around with me lifted, and I could finally focus on a few things that made me happy – like my family and writing. I worked on my mind, body, and soul – and it started healing itself. Holistic approaches to health and wellbeing is just so damn important – and since I am always one of the first people to preach the method – I can’t understand how I forgot to practice it.

I got a new job at the end of November, working for Transpower – the owners of our National Power Grid. The Energy industry is actually an area I have wanted to in for a long time… and I got my opportunity. The team are a nice bunch of people. The role I am doing is not a role I would stay in, but since it’s only a three month contract – I’m happy to stay there, and get the industry knowledge onboard.

I upgraded my computer system in December. The new laptop is great – apart from the sound range through my headphones. May have to get that looked at soon before it drives me completely batshit. Other than that – it runs my writing and design programs like a freaking dream, and its super-duper fast.

While I know that’s an awful lot for a year – we had one more thing go significantly wrong. Just before Christmas we had a massive fire sweep the hillside in our family bay in Marlborough Sounds. This managed to wipe out huge amounts of trees and bush area, as well as my Mother in Law’s hobby shed, one of the foundations poles on her house, the tool shed, the storage shed, and our cottage. What a flaming mess, to say the least. This is why I haven’t been able to finish off writing Tijuana Nights before the New Year. But… the light at the end of the tunnel is insurance. This is why we have it and pay their premiums each year.

Who knows what 2014 will bring. I’m guessing that there will be some rebuilding of stuff in the Sounds, hopefully the publishing of a book or two, more design work, and Abby will grow and learn each day as well. And before I know it, I’ll be wrapping up 2014.

And… on that note… HAPPY NEW YEAR!