McKenna Carmichael thought things couldn’t get worse – not after catching her boyfriend with another woman. That is, until Luke demands she pay him back for every expense he made in her name, and half the house.
The problem is, McKenna is already struggling to make ends meet, let alone raise the money Luke’s harassing her for. A friend offers a solution…if she’s game enough.

Can McKenna turn from a reclusive historian to sex-pot, or will it end up being more trouble than it’s worth? 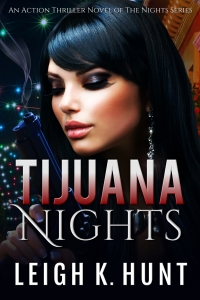 Getting shot at was never on McKenna Carmichael’s bucket list, but then neither was being hunted by a Mexican Cartel.

After missing her flight, and then watching it blow up midair, Mack is stuck in Mexico and the only people she can trust are the ones that put her in this position in the first place.

River, Chase, and Gabriel offer Mack protection while they bring the El Diablo Cartel to its knees, and only by assisting them with yet another job will she gain the skills she needs to save her own life.

Her trip to Tijuana began as a simple game of distraction. Now it’s a game of survival.

McKenna Carmichael has a new job in the beautiful country of Italy. This isn’t a pleasure trip: she must eliminate her mark and get out.

Her target Luigi Donati is rich and handsome, and his fashion house leads charity work. But his dossier shows that’s a front, hiding ties to where his real money comes from: slave labour.

Mack realises that not only is Luigi innocent, but someone else is intent on killing him. Thrown by doubt, Mack must choose her role in this Italian job — predator or protector.

Leigh is also published in the Tales for Canterbury anthology, which is to raise money for the Red Cross Christchurch Earthquake Appeal. She feels incredibly privileged to be a part of this wonder endeavour to raise money. The Anthology is made up of 34 short stories, from writers that are not only New Zealand based, but some of which are well known around the world.